BlitzWolf has recently released a smart air fryer which sparked my curiosity since I didn’t know what an air fryer is or why would you need a smart one. The always forthcoming Banggood has sent me one for review.

Full disclosure: This is a review sample sent to me free of charge by Banggood. Review is not influenced by that fact and is solely my opinion.

Smart devices have taken care of most of our lighting needs and are steadily moving into our kitchens to justify the home part of smart home. Welcome to “Cooking with Blakadder”!

BlitzWolf BW-AF1 Smart Air Fryer is available from Banggood, delivered from China or EU. EU stock delivery was at my doorstep in 3 lightning fast days.

Before we proceed I do need to nitpick a bit. Its not really an air fryer! Frying is a process of cooking food in hot fat or oil while this type of device uses fan to move the hot air around the food which is a convection oven. Despite all that I’m still gonna call it an air fryer, it just has a much better ring to it!

Safely styrofoamed in a sizeable box was the, truthfully, very badass looking BlitzWolf BW-AF1 air fryer. It definitely doesn’t look like any of the kitchen appliances I own. All that came with it was a very spartan instruction leaflet. I was hoping for a recipe book… 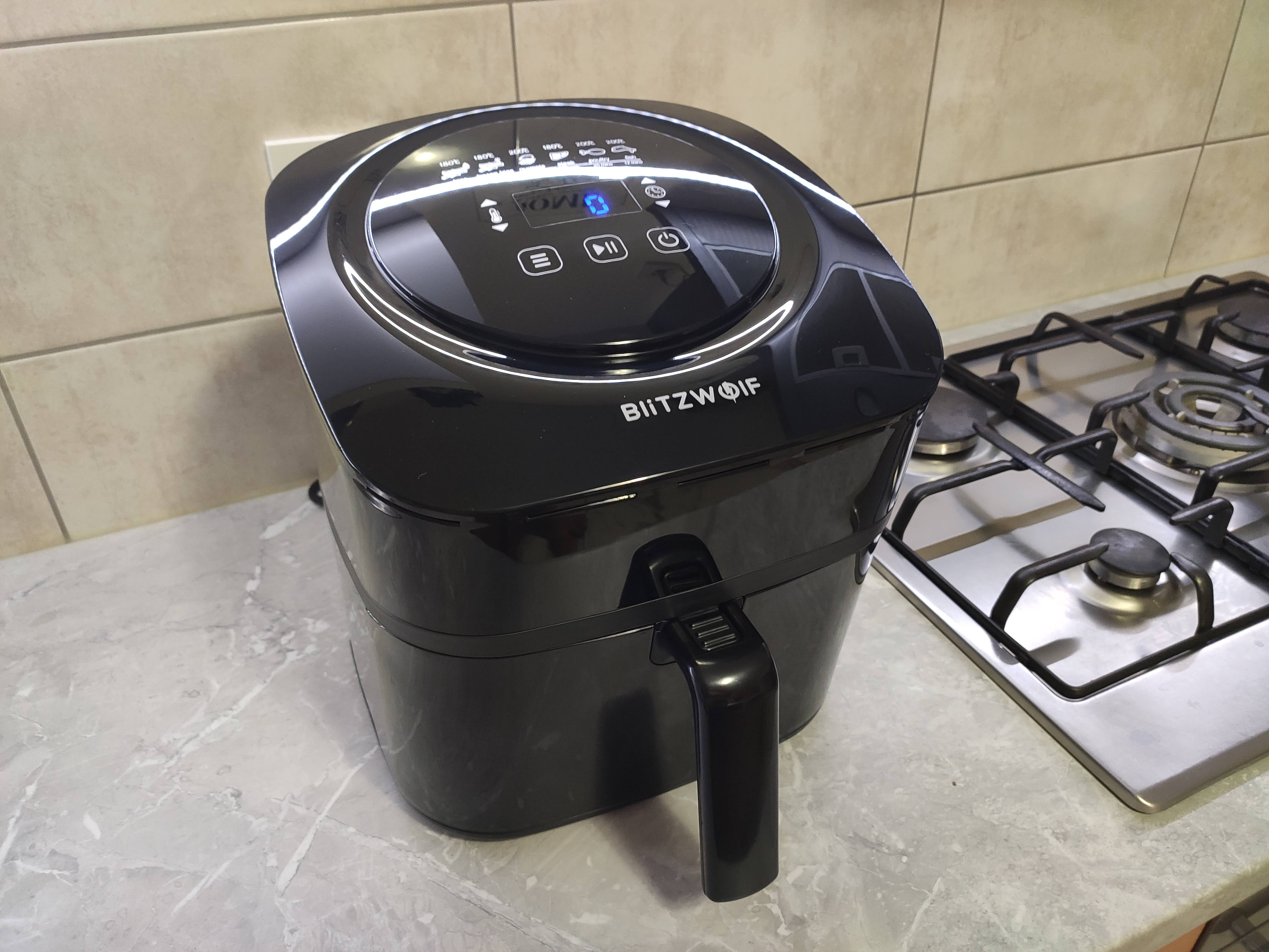 Air fryer consists of the device itself and a three piece cooking tray with maximum volume of 6 liters. 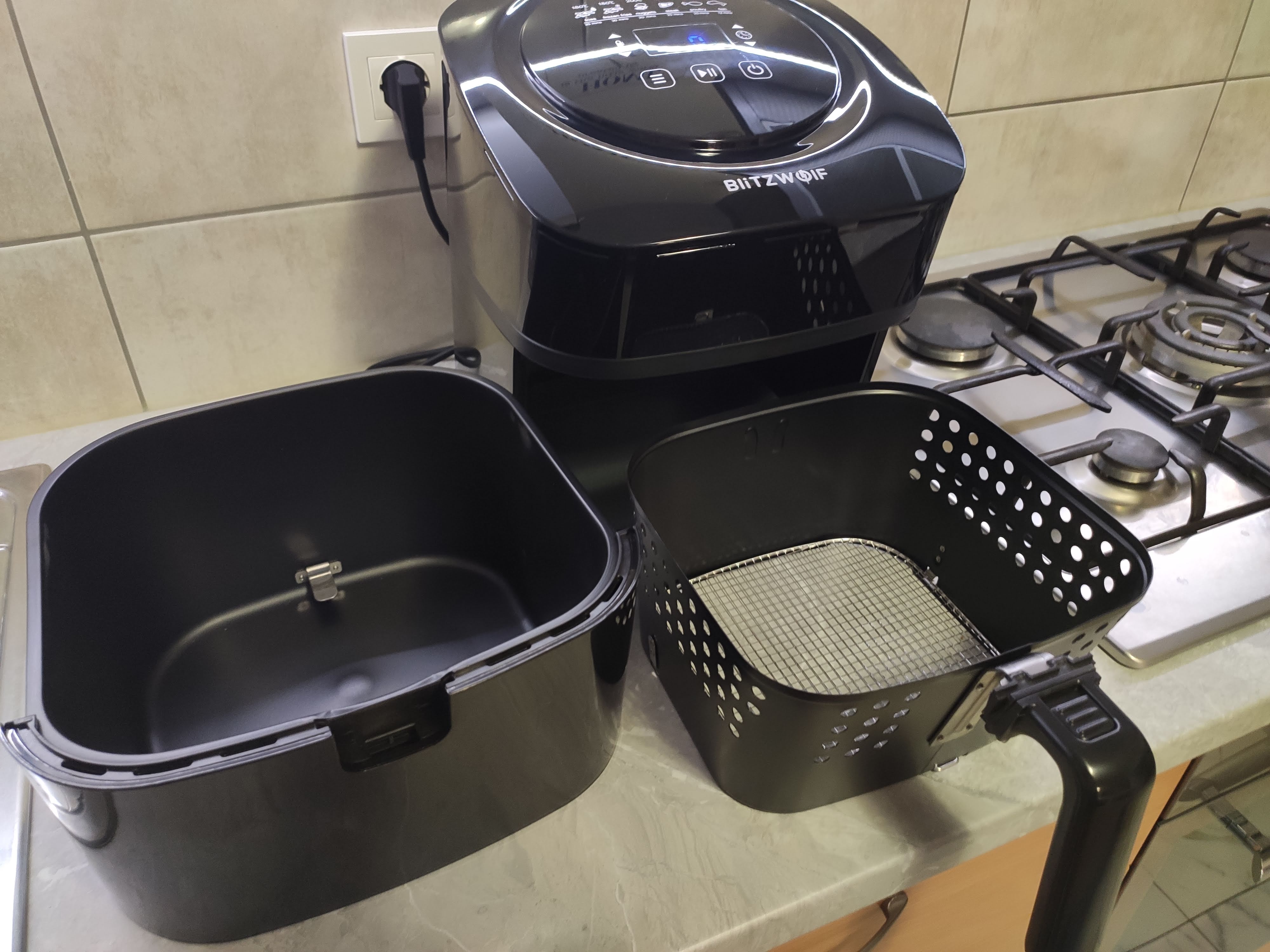 Control panel is situated on the slanted top. A design detail that makes the use of the control panel because more natural. Control panel consists of an LCD display and on its sides are touch buttons for setting cooking temperature and cooking time. Bottom row has cooking mode select, start/stop cooking and power on/off. Top row has icons of the programmed cooking modes with cooking temperatures and duration but, disappointingly, they’re not touch buttons. They only serve as a pointless reminder. Yes, the plastic is shiny and incredibly reflective! 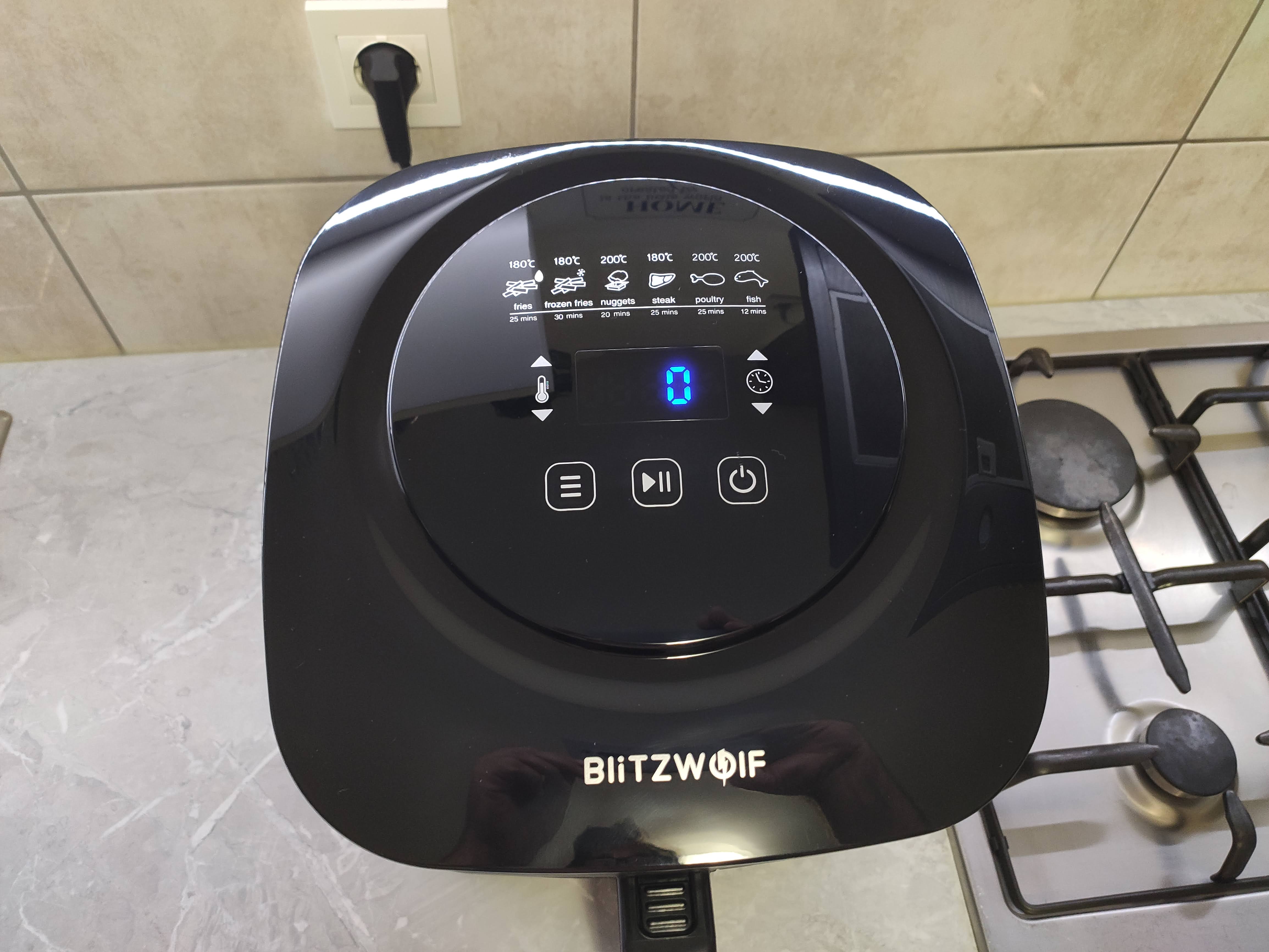 One small, seemingly irrelevant, but very useful addition is the inclusion of carrying handles at the bottom of the device. It is a lot easier to move the fryer around with the help of those. 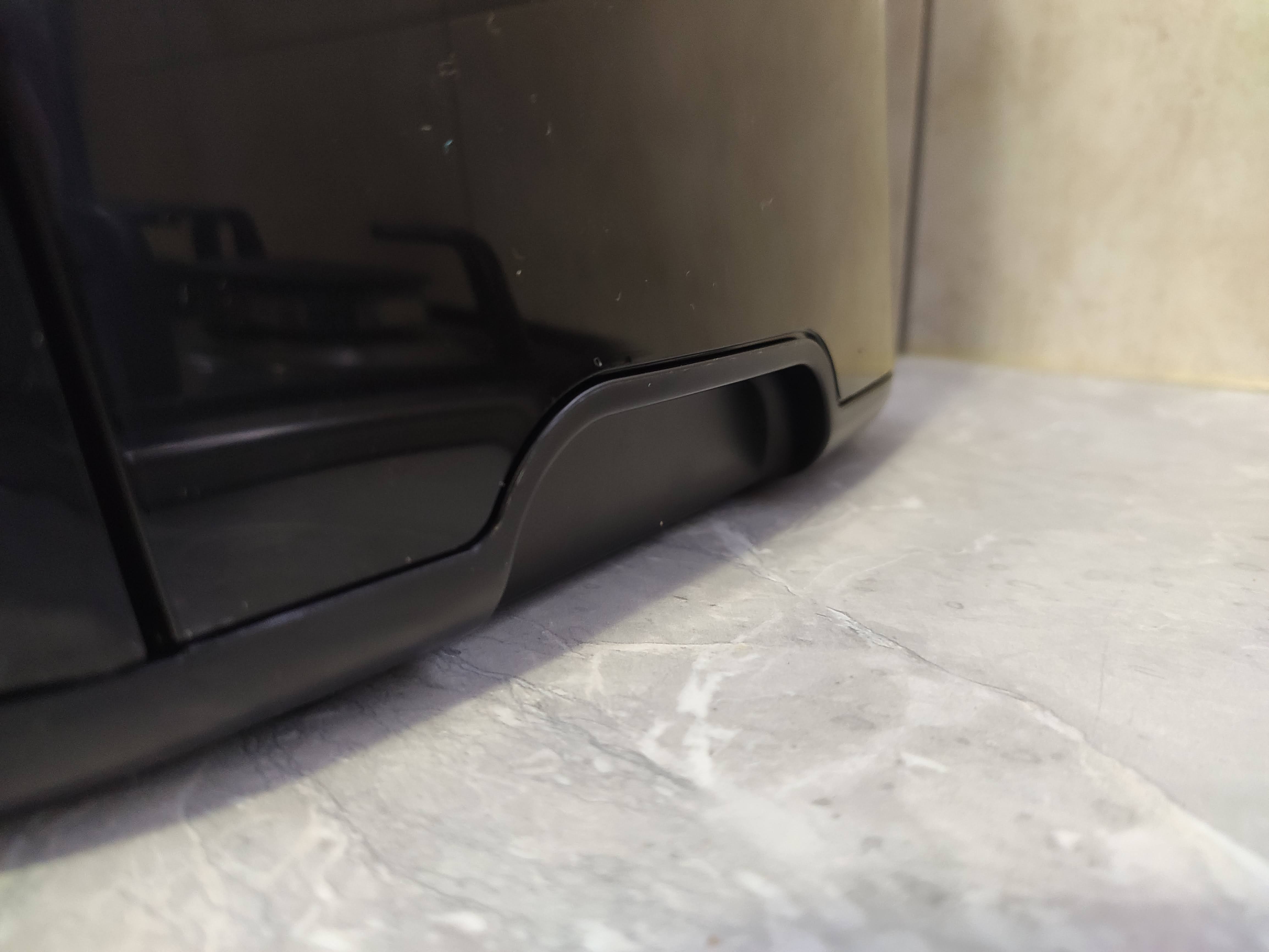 How smart is it really?

After plugging it in, pairing to my Wi-Fi was as simple as instructed. They even used the LCD display to show the progress of the pairing process by incrementing from 0 to 3. The air fryer is supposed to be used with BlitzWolf’s app but it happily works with Tuya as well. Both apps have an identical UI, even the changes made in the Tuya app will transfer to BlitzWolf’s app after repairing the fryer. 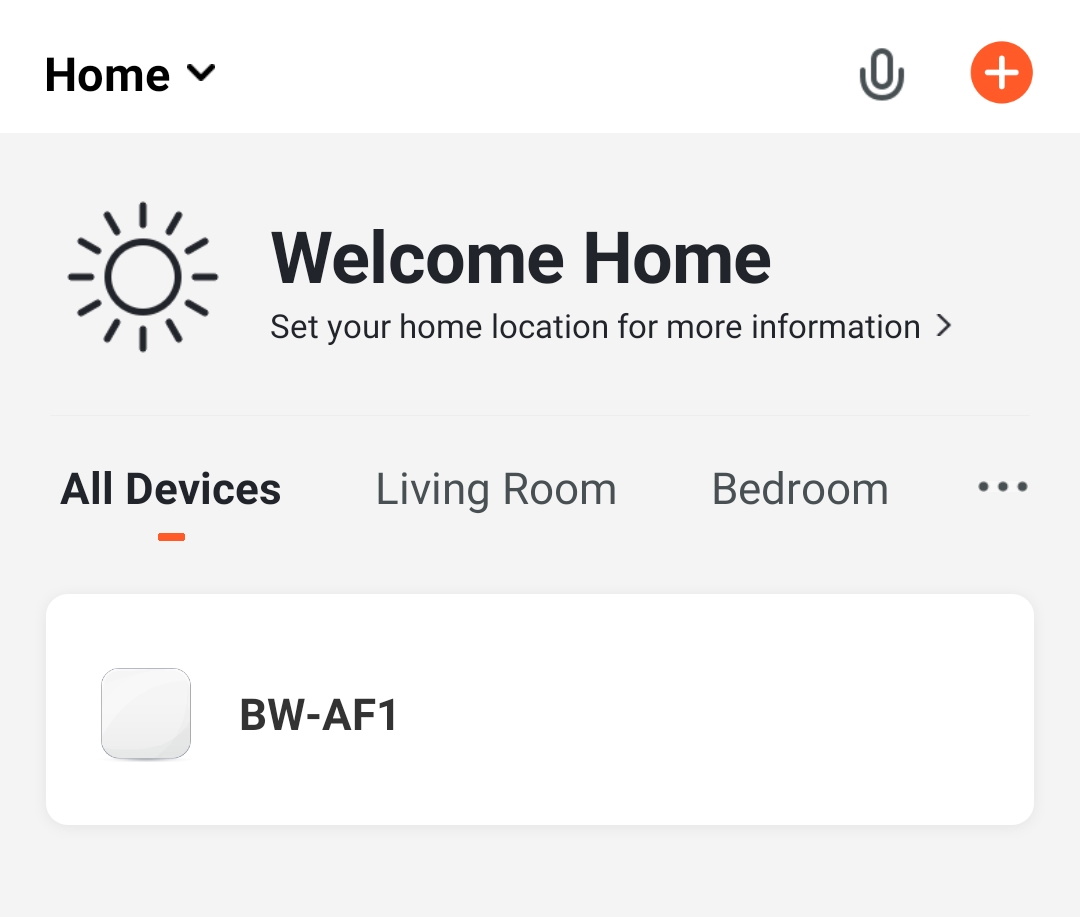 All the features of the control panel are available in the app but now you can use the icons to quickly activate the predefined cooking modes. There’s also the time remaining display with the addition of the current fryer temperature display. Of course you can use the app to set timers and include it in automations using your other devices. Fryer can also be powered on and off from the app.

The app shows device supports Google Home integration. Technically it does but not really… The fryer will show up in Google Home but it’s added as a climate component with no control. It doesn’t even display the current temperature. Complete fail!

Completely deflated by the Google Home debacle I fired up the Tuya integration in Home Assistant hoping to see something listed there. Nope, no support for it in there either.

Seems I’ll be stuck using IFTTT (T is for “terrible”). If only there was some open source solution to replace the existing firmware… foreshadowing

Let’s cook! I grabbed a bag of frozen nuggets and expertly dumped them in the large air fryer tray. Selected the nuggets in the app and pressed play. The LCD display shows the selected mode, time remaining countdown and, for some reason, an animated spinning fan.

During cooking the fryer was much quieter than expected. See, or rather, hear the video:

If you wish you can follow the cooking temperature and timer countdown over the app. Sadly, when the cooking was done, the app didn’t notify me, only the loud beeps from the air fryer did. Hmmm, promotional material claims a voice prompt will inform me when it’s done. Must’ve been lost in translation…

The nuggets cooked just fine, can’t expect greatness from a bag of frozen nuggs. What was a revelation and the main benefit of the air fryer is the easy cleanup: minimal wash up without being left with a couple of liters of oil full of burned bits. The cooking tray’s bottom is removable and the entire tray is dishwasher safe.

Do you really need one?

During the week I prepared frozen fries, croquettes, “grilled” cheese sandwiches, mini pizzas and ultimately a tray of lasagna with varying degrees of success. The ready made lasagna was a surprise standout. The promotional images show a whole chicken inside but it seems Chinese chickens are smaller than European ones cause all the ones my freezer couldn’t fit.

Ultimately the air fryer excels at reheating food and cooking frozen goodies (fries, croquettes, onion rings, mini pizzas, …). It doesn’t do well with “wet” foods since everything just drips into the catch tray and makes a huge mess. I’m very fine with that limitation and so is the rest of the household. It has reduced the use of the oven, a welcome relief during summer heats and reheated food is nice and crisp unlike the soggy mess that you get from the microwave.

For the money (89.99$ on Banggood at the time of writing) it is a highly competent kitchen appliance punching above its price bracket. The design is really cool and non “kitchen appliancy”. Well, at least in my opinion, Ms. Blak had some choice words about its looks. Most important of all, a very large cooking tray which is easy to clean.

As a smart device it is sadly barely okay, lack of proper integration with Google or Alexa should not be an issue anymore in a device advertised as “smart”. On the other hand, apart from using the app instead of the control panel, there’s not much to gain from those smarts anyway. It is easier to just use the control panel buttons to manage cooking then hunt for the phone, open the app and do almost the same thing.

Yes! While Tuya-Convert was not possible due to the new firmware it can still be taken apart and flashed using serial. Although the disassembly process is somewhat of an ordeal ultimately you will discover a TYWE3S module inside that can easily be flashed with Tasmota.

In the next installment you’ll learn how. Also more on how to fully integrate it in Home Assistant and even kind off overclock it.

Write me your ideas on how to leverage it being smart and make it easier to use!